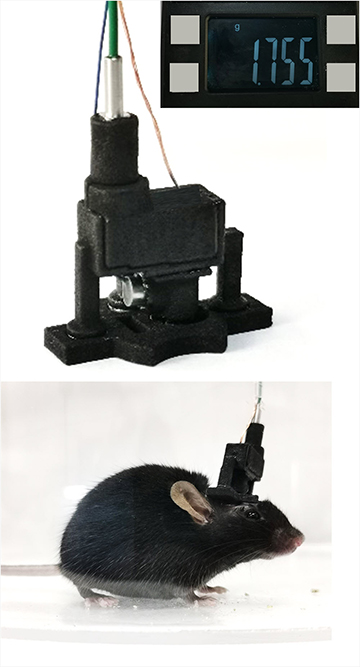 A new detachable microscope for mice might allow for insights into neurodegenerative diseases through long-term studies. Created by a group of researchers in China, the microscope attaches to the head of a mouse with magnets and uses optical-resolution photoacoustic microscopy (ORPAM) to handle the imaging (Opt. Lett., doi: 10.1364/OL.444226).

“[For the first time] we successfully extended ORPAM from anesthetized, head-restrained [mice] to awake, freely moving mice using this probe,” said Lei Xi, researcher at the Southern University of Science and Technology, China, and a coauthor on the new study. “All the in vivo experimental results demonstrated that our probe is a promising tool for investigating mice brain activities in freely moving condition.”

In the past, ORPAM probes have provided fundamental insights into cellular activity and the operation of groups of neurons during certain behaviors. Designed to study the flow of blood in the brain, ORPAM can glean both structural and functional information on vascular networks there. It also allows imaging of brain functioning without needing fluorescent dyes.

However, before the new work, the technique hadn’t been able to image the brains of moving animals. “Brain research under an awake and freely moving state is currently a difficult and hot topic,” Xi said. “To achieve this, we need a specially designed imaging probe.”

The new probe builds on the group’s earlier research creating ORPAM devices. The group has previously created a wearable ORPAM device, but at 8 grams, it was too heavy for the mice to wear and still move freely. Cutting the weight to 1.8 grams and more than doubling the size of the field of view, the new microscope is the first to allow ORPAM imaging in freely moving mice.

The researchers hope the new detachable probe will open the doors for long-term studies of neurological disorders and neurodegenerative diseases that can be induced by blood flow restriction, such as epilepsy, Alzheimer disease, and Parkinson disease. 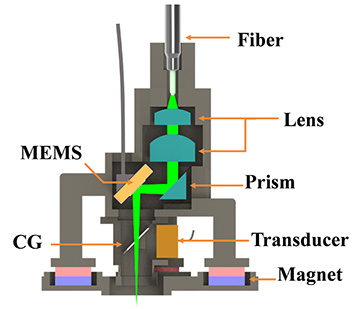 The probe, which contains an optical fiber, a miniaturized optical scanner and a small piezo-electric ultrasonic transducer, also differs from its predecessor in its removability. Using three pairs of magnets, the probe can be repetitively attached and detached to a permanent mount on a mouse’s skull.

The researchers have tested the probe on synthetic tissue and on mice, where it imaged vascular networks over 40 minutes. A seven-day study was also conducted, showing the probe’s potential for long-term research.

The researchers plan to continue improving the device, aiming to boost the resolution and imaging speed. This will help researchers better study links between brain activity and diseases.

“The work in this paper is our first step. In future, we will develop a probe with better performance, such as capillary-level resolution, video-rate imaging speed and a large field of view to cover the entire cerebral cortex,” Xi said. “Based on this new probe, we will perform more meaningful studies to find out more secrets of the brain.”